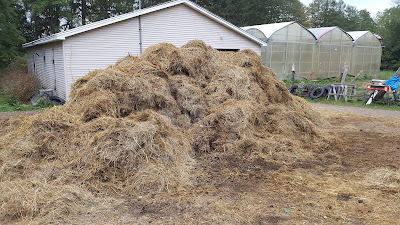 There are so many photos I could start with for posting on this new chapter... so why not start with an image that represents the decay and renewal of life? Behold- COMPOST. 4-year-old composted manure gold one story high. Patiently waiting for the field. This pile sits on the land we're renting, lovingly collected by the sweet landlady who grew up on the property, on Haudenosaunee territory in Niagara. It's the result of the love and care she lavishes on her sweet llamas, alpacas, and teensy horses. Organic and healthy and vibrant. I am in no way a farmer and would never pretend I am, but I aspire to learn and grow along with our tiny plot on this farm, my sweat and most likely my blood offered up in service to the plants, which are being grown for my community to eat, to make medicines, and to beautify life.
I have always been told and appreciate that it's best to grow your own plants/food, and make your own medicines. It's a lovely sentiment and we can do that in a multitude of ways from a pot sitting in the light on a sill, wildcrafting ethically, or joining a community garden. I have reached this point in my life- right now- where access to this land and this lifeway is a privilege I need to acknowledge. I want to, and aim to, facilitate this connection for those who don't have:
I'm doing this in a few ways- first, I'll be starting a small-scale organic farm using traditional Indigenous agricultural methods (some might call this "Permaculture" and "Biodynamics") this spring to grow medicines for my community, my own practice that serves my community, and to support a few small local/bioregional medicine makers and healers who don't have access to or time for medicine growing/making because they're so busy serving our communities. Second, I am co-developing a mobile herbal clinic to provide access to herbal medicine to underserved communities in the Niagara/Hamilton region. Third, I am dedicating a portion of the farm's production to the Niagara Farm Project, a local organic collective of urban farmers who produce food for the Niagara community (who I am also writing a manual on herbal gardening for in the coming months.) There's so much more coming on the Ethnobotany/Anthropology side, but that's for another post. For now, this will do. It's a start!
Posted by Unknown at 2:15 PM No comments:

It's been almost a year since my last post, which should say something about the way life has been going lately. Breakneck speed mixed with bouts of freedom, revelations, and tons of change.I've interwoven some photos here from Life this year.

Noel and I hit a really tough spot last winter just as I was starting to really get into running. We've been through the gamut and after some amazing therapy (individual) and honest, nothing-to-lose talk, compromises, and recommittments, we are stronger than ever in a REAL way. I'm sitting next to him right now and am feeling blessed to have him in my life.

I stopped running in the spring when my Achilles became too strained to withstand a short run. RICE'ing it doesn't help. I never completed my No BS Run Club half marathon and feel like a failure. But I know I'm not, I'm just like every other person who became enchanted with running in the honeymoon phase but didn't make it a sustainable part of my life. Now I'm dealing with some really intense chronic pain, major fibromyalgia flare ups, and two injured knees (more on that in a bit) that has me really rethinking what exercise looks like, and has proven to me how important movement is to a healthy body. I'm starting physio as soon as exams are over.

"Exams?", you say? Yes. Exams. After finishing my Chartered Herbalist diploma in June (yay!) and my first year of Traditional Medicine training (double yay!) I decided to try out other avenues of edumacation. So I enrolled at McMaster University for a summer Anthropology class and fell in love. I researched and fought hard to get my financial life in alignment with full time school, and on September 8th I left a full time working life for full time school. It's been the hardest transition of my life outside of, well, the last hardest transition in my life. Pick one, they've all been hard. There are no easy transitions, usually. But then, if they were easy, they'd be kind of boring, innit?


Amidst the beginning of school, on Day 2 actually, life took an unexpected turn. I hurt my knee at school, bad enough to have to go to the hospital (hence the two injured knees) and Noel raced home on his bike to pick up our car and drive to the bus stop to come get me. On his way there he felt sort of odd, arm tingling, chest-tighteningly odd. Heart attack odd. Basically, Noel stole my knee thunder with a mild myocardial infarction. He was a trooper through the whole ordeal, and is now on the road to better health with no need for surgery, thankfully.


It's now December and I'm in the throes of writing exams. I'm pretty much procrastinating by writing this post, but what the hell? It's been almost a year and I can't leave this blog empty for an entire year! I know no one reads this, it's mostly my own accountability to myself and sort of a fun expression to get out my thinkythoughts, so I don't feel bad. Sometimes it's nice to see who I was a year or two ago and see how much I've changed, what's important in life at that moment, and how things evolve.

Hope #1: I recently decided to reduce my courseload to part time and take another full time job, mainly because I love my home and don't want to lose it. That, and I am totally BROKE and need to make more than nothing, which is what I'm making right now. I shouldn't say that, I do get funding through my band (Oneida, SixNay all the way!) and it's super helpful, but it's not enough to pay the bills. I just accepted a position with a cancer hospital as their first ever Aboriginal Community Outreach coordinator. It pays well, has benefits, and most importantly- they want to support my education, so I can still move towards that end. It's an important decision for me. This is the only position I would have said yes to- mainly because it deals with cancer and ethnic disparities in health. I hope that the work I do prevents what happened to my mother and my family to some other family.
Hope #2: When I lived in the Red Light District in downtown Hamilton I became familiar with several Ladies of the Night. I saw them come and go, do the Crack Dance on the corner for more hours than anyone should have to work, and disappear altogether to an unknown, uncertain, and most likely dangerous future. I want to give back to these women. They may be damaged, they may be shells of themselves, but they deserve love and compassion, just like every other human being. It's so easy to write them off, slut-shame them, and believe that we're somehow better than them. My hope is to bring them a small spark of peace and gratitude. I'm enrolling to volunteer to being clean needles, water, condoms, and food to these women, and to be armed with compassion and resources for safe space and respite.
Hope #3: I'm 40 years old and have thought about the idea of children for, well, pretty much my entire life. I had 3 miscarriages with my ex and decided that was enough and that I would stay childless by choice. Since we split up I have thought about the potential for Noel and I to raise a family, but he's been snipped, so I sort of gave up on it again. I finally have a job that offers benefits, IVF included, and we're seriously considering it. Or adoption. I want to try IVF first, but we might end up adopting anyway. My hope is that by the end of 2016 I have made a decision and followed through on making it happen (or not).

It's -18C out there right now, which results to about -1F. A Polar Vortex (stop being dirty) has descended upon us in Southern Ontario. -1F equates to something I like to call "PFC": Pretty Fucking Cold. This has led to a deeply uncomfortable quandry, something I've always resisted, like going to the dentist, or hugging my ex mother in law: running in snow. What I've learned is it's best approached these things head on and as fast as possible, like ripping off a bandaid. I know, I know,  I keep going on about running lately, but it's definitely the one thing I'm most consistent with in my life right now, aside from being consistently inconsistent. So, I give you: Running in PFC Weather.

I've never run in weather this cold before, and used to judge anyone I saw traipsing along the darkened deep-winter city streets, be it alone or in packs, as deeply disturbed individuals (or, packs of crazy people running the streets in search of havoc to wreak). Nicole and Ryan, my running coaches for my 13.1 program, offered us a great group call last week during which we lamented the cold, making up all sorts of challenges and barriers to get out of it. They bravely and confidently volleyed each one with Awesome Solutions. Too icy? Wear Yax Trax! Too windy? Remember your balaclava! Snow too deep? There's always the treadmill! What I got out of it was: YOU CAN'T GET OUT OF IT, SO DON'T BOTHER TRYING. I didn't shell out cash and sign up for this to get out of it, so Monday morning I suited up in waaaay too many layers and stood bravely at the door, firmly believing that once opened, the wind and snow would suck me right outside.

5 minutes into it I realized I was dressed way too warm. Lesson 1 from Coach Ryan: dress like it's 15 degrees warmer than it actually is. I guess because I never run in 15 degree weather I wasn't sure what that looked like, but now I know!

Some other winter running tips:


I'm sure I'll learn more as the winter goes on, but for now, them's the tips. Maybe by the end of the season, after I've expended all my expendable income on new running gear, I'll do a fancy graphic-against-a-white-background thing and offer something of real value. I mainly wrote this post to use the new meme generator I found and to somehow involve my very favorite scene from National Lampoon's Summer Vacation. In my defense, it was crazy,

Posted by Unknown at 7:09 PM No comments: